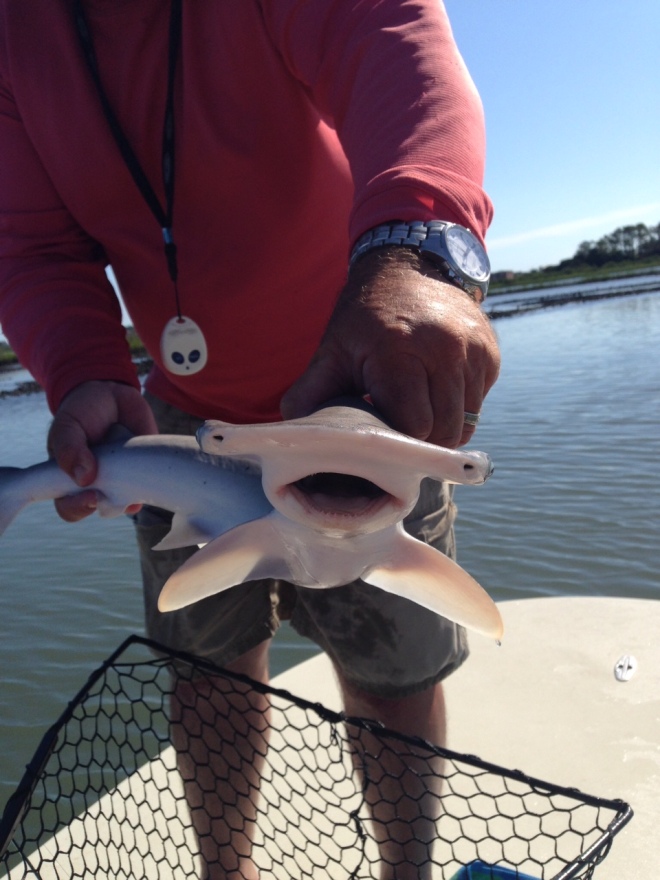 In all my years guiding, I have yet to find a kid which does not have a blast catching sharks (and most adults too). Fortunately, this is the right time of the year to target redfish early and as the day heats up switch over to catching  bonnethead sharks in shallow water. 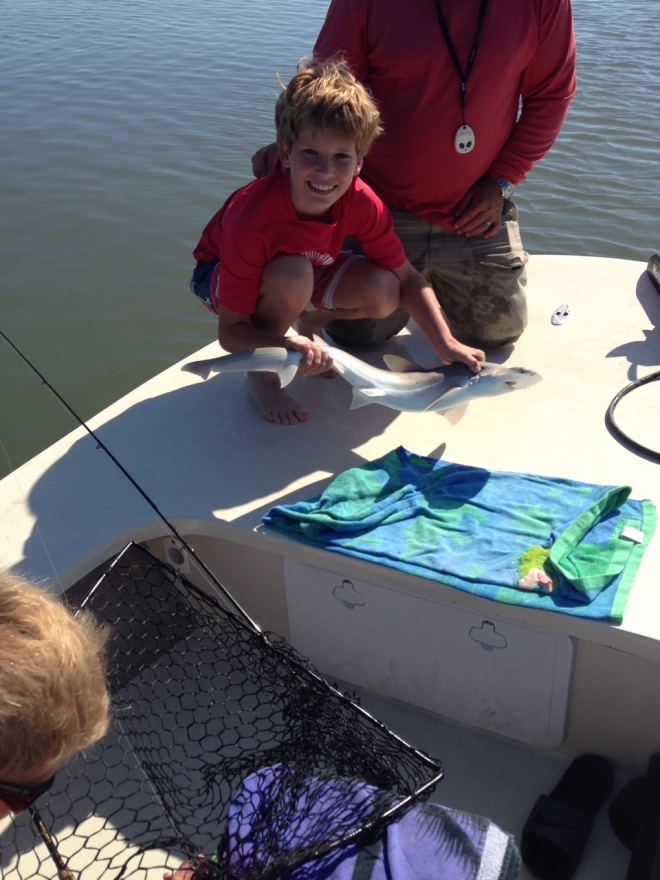 Daniel was all smiles after landing the first one of the trip. He was especially excited since it was a small one and he was excited to hold it for his picture. 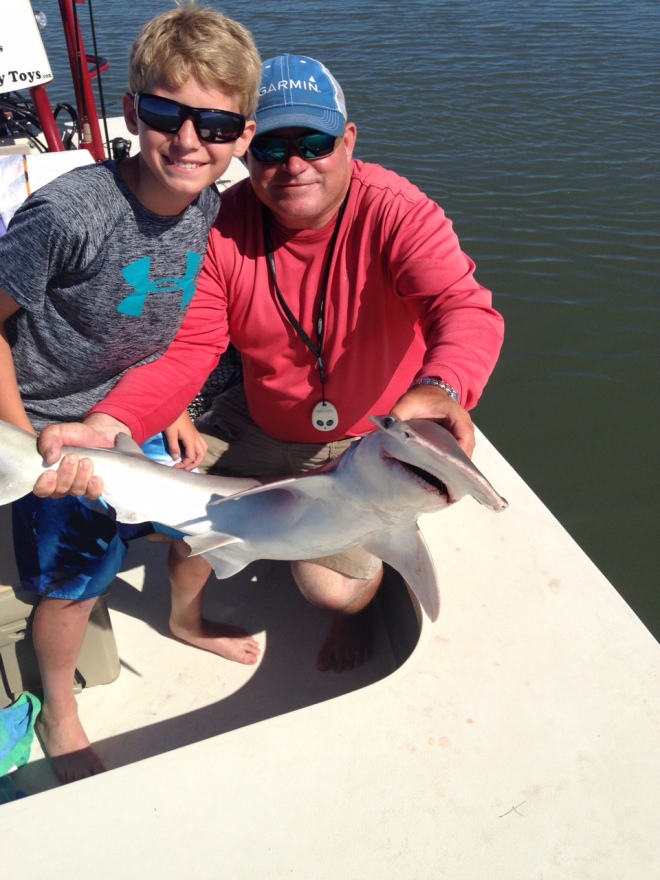 Noah was amazed at the fight from his shark! Prior to this trip, he had only pond fished for blue gill. Since this guy was about 3.5 feet long he took my advice and let me control it for the picture.

These boys really enjoyed battling these guys, however, they were just as excited to watch them swim away safely. I think they are already trying to convince their parents to come back for more. According to Steve, Daniel’s father, this trip was the most talked about event of their long weekend of fun.

I have had the pleasure of fishing with Jim on several occasions. Whether we are discussing fishing or baseball, this guy has a lifetime of stories! Today, however, saw a couple of “firsts” for his family. This is Jim’s first snook ever – 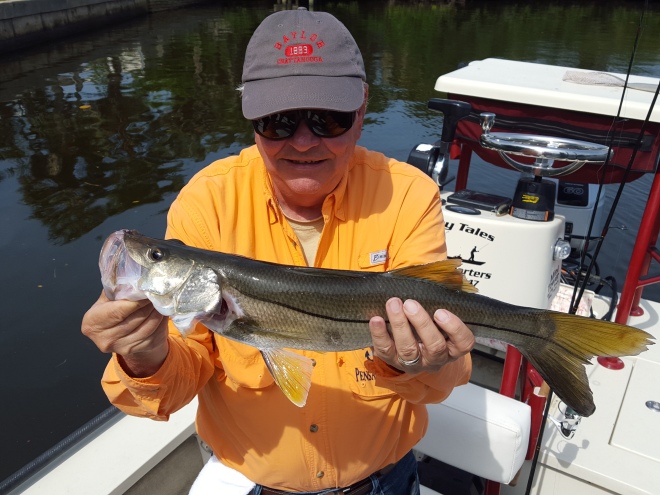 In all of their years fishing together, today also had Jim’s son catch his first redfish also! 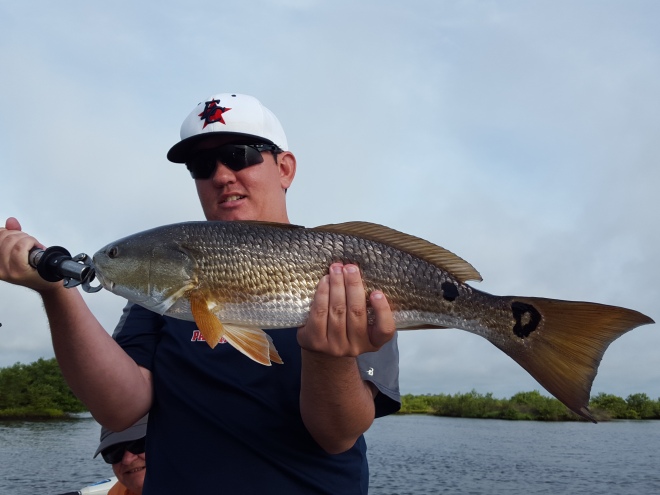 I sure do enjoy helping families create some lifelong memories.

My clients today have been lifelong best friends. It was quite apparent by all of the good natured ribbing! By the end of the trip, Mike had caught his largest redfish to date. 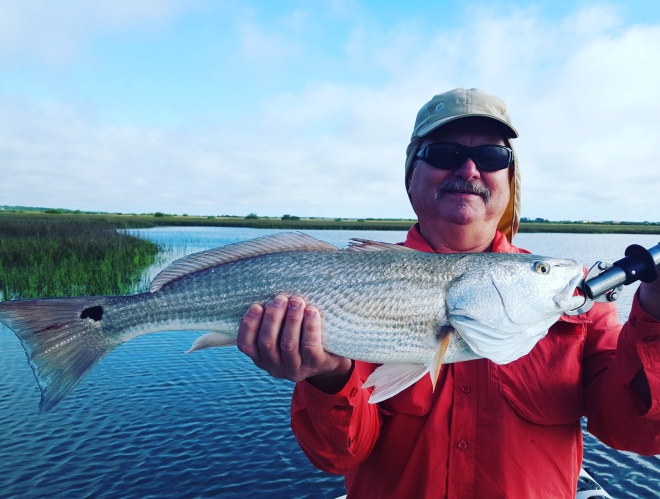 Of course David had to do something to one up his buddy. His first effort fell a little short, still a nice fish however. 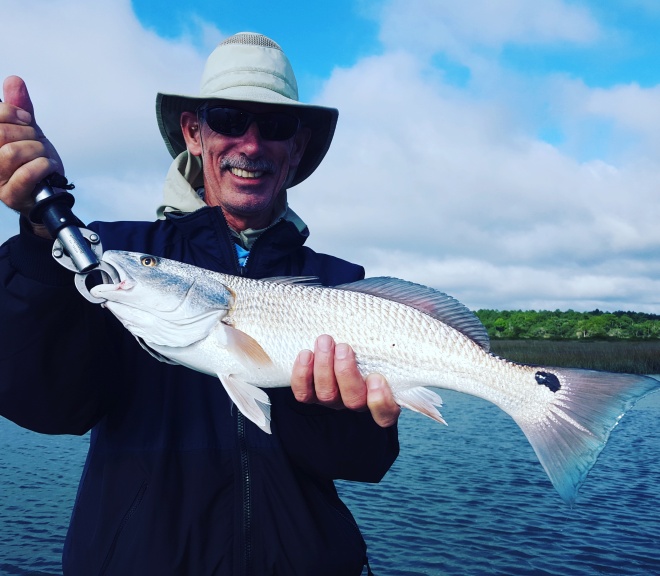 The next fish made him high hook for the day. What a beast! 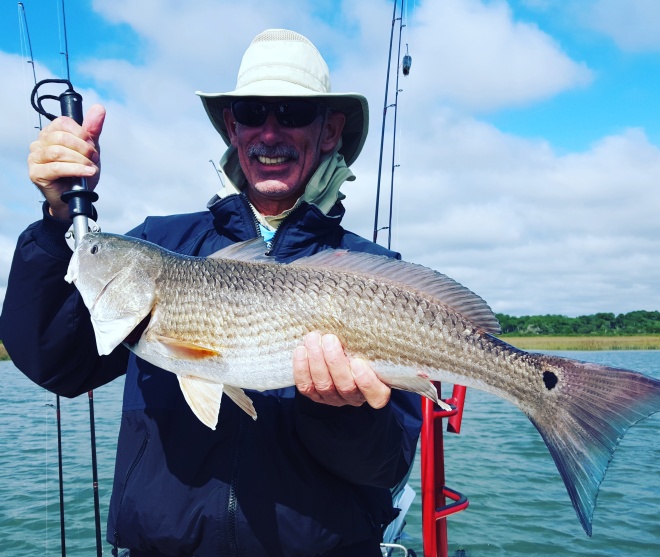 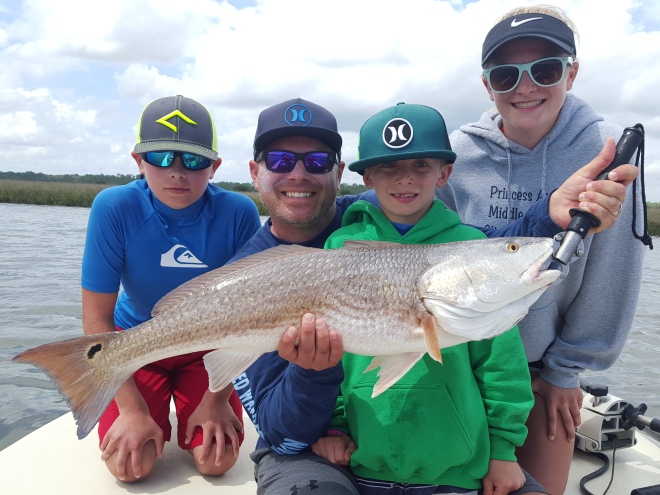 On March 31st, I took Nick sr, Madelyn, Nick jr, and Ethan out for a morning charter. Ethan (8 years old) caught the fish of the trip, a 32.5 inch 15 lb. redfish! This was his first redfish! There were plenty of fish caught by all. Nick jr is taking partial credit for the fish since it was his ladyfish that we cut up for bait.

That afternoon, I had the pleasure of assisting another youngster with her first redfish ever, also. 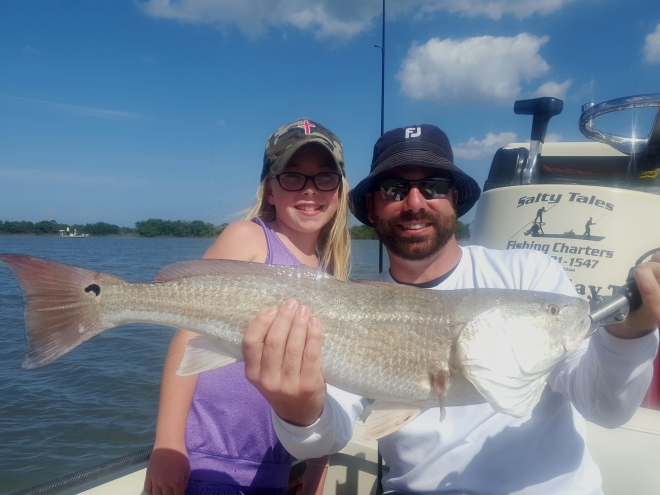 Jacqueline (10 years old) was so excited to get this one in the boat. We were fishing around a lot of oysters and the previous 3 fish cut the line. Her first redfish came in at 27 inches and a little over 7 pounds.

I consider myself extremely fortunate to be able to help families make these lifelong memories! Hopefully these kids will be sending me pictures of their new personal record fish.

What a way to start a trip,

As my clients were getting out of their vehicle, I was in the parking lot trying to rush them to the boat.  I told them that I knew where some fish were that would provide us with instant action.  Bryan and his uncle Derek were in the boat for just a few minutes and they already had several doubles on Jack Crevalle. After the 6th double, Bryan said he was expecting a school of small fish when I told him we were going to catch right away. 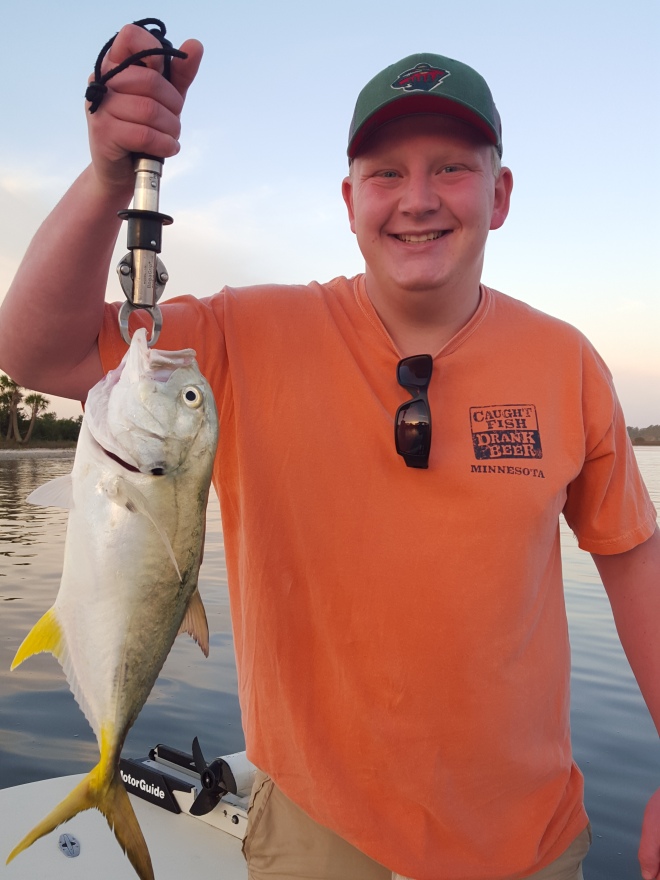 After catching a few more, he looked at his uncle and said, “this is better than a cup of coffee”!

After a fun start with the jacks, we moved on to some redfish. The guys did really well with those also 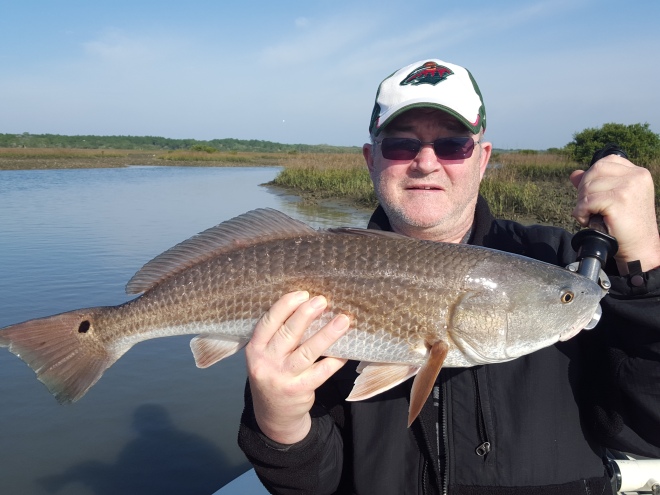 Derek scored first with a nice 26 inch fish! Not to be out done, Bryan’s first redfish ever was a 29 inch brute! 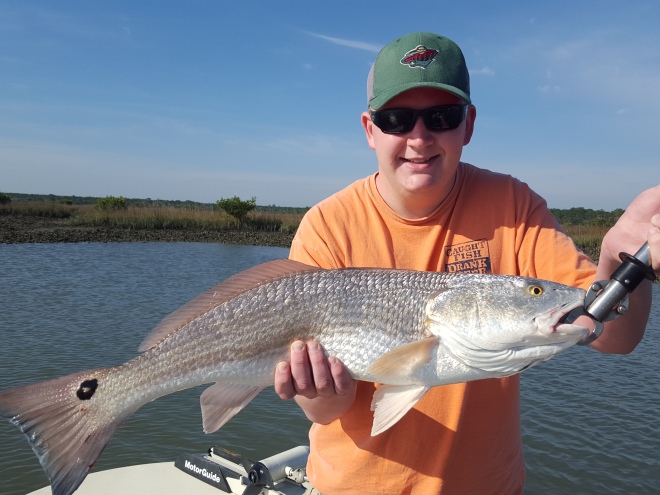 As Michael Bass and I were idling out of the no wake zone from the boat ramp, he was explaining to me how he has had a goal of catching redfish for over ten years.  After trying unsuccessfully for 10 years worth of vacations he decided to hire a guide. Well this was his result, within 20 minutes of launch, not a bad “first” redfish. 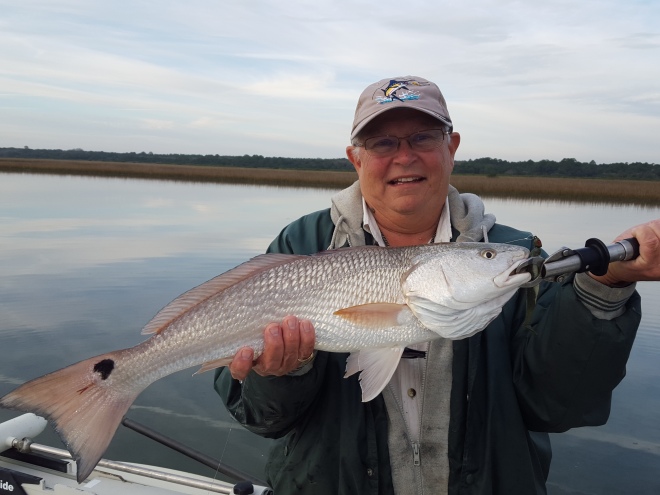 We had slick conditions and a cooperative school all to ourselves.  He sight fished 4 of these beauties using a 4 inch Grandslam Baits paddle tail on a 1/4 ounce Slayer jig head.

Eventually the wind came up and the fish became harder to spot.  We moved on to fishing with blue crab for bait. These guys showed up for a snack. 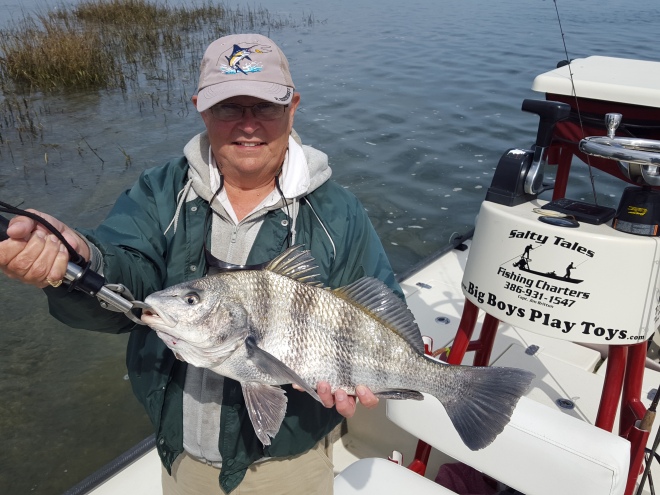 I think Michael is sold on hiring a local professional to take him fishing when he travels!

When Ashleigh and her father got on the boat she was already talking about how she was going to name all the fish she caught in alphabetic order. Randall immediately asked what she planned on doing after “z”?!

Nothing like starting a trip with a little pressure!

About ten minutes into fishing Ashleigh already had two fish. This was “Bert”. 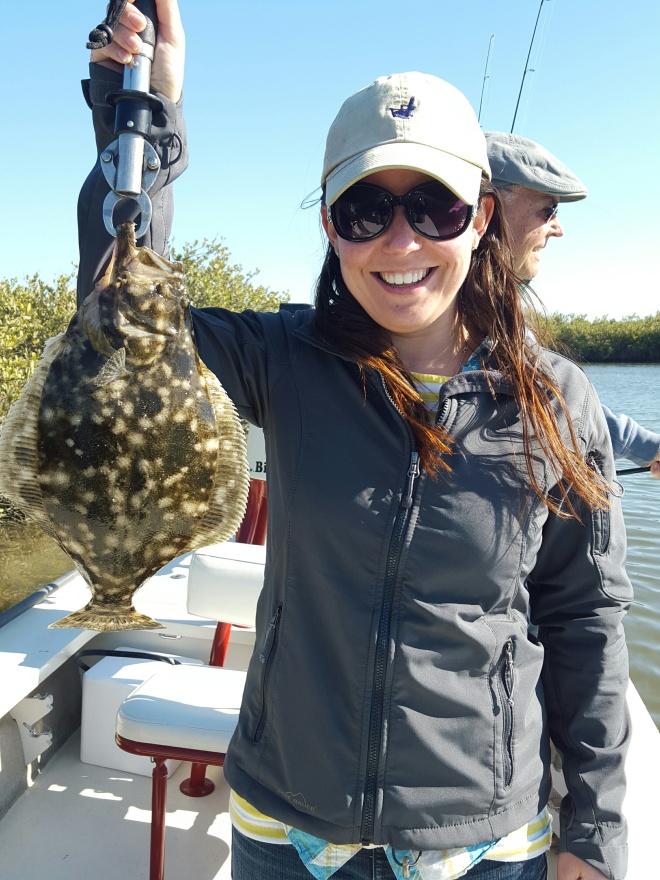 We made a small move to another spot and had a fish break us off on the first cast.  The spot was good to us after that though. The pair of anglers caught sheepshead, trout, and redfish. Most of the fish were lower slot or short fish. However, after catching “Yanni”, Ashleigh hooked into a nice fish. Meet “Zeke”. 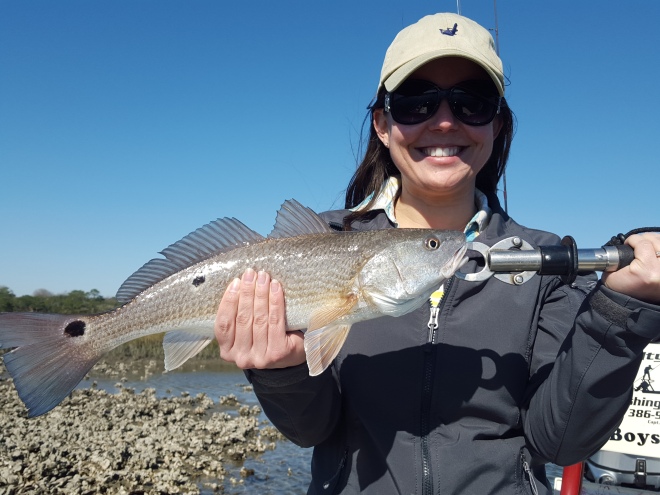 Mission accomplished – we made it through the alphabet and even caught a few more.

I had frequent flyer Gary and his brother-in-law Jeff on the boat, Wednesday.  We decided to hit the water early to get in some sight fishing before the winds picked up too much. By the time I arrived at the ramp, it was already time for plan b, the wind was already blowing across the flats! So instead of jig heads and Grand Slam Baits paddle tails, I switched over to 3/0 Daiichi circle hooks and we left the ramp.

At the first spot of the day, we casted out one live bait and one cut bait. It did not take Gary long and he landed what would turn out to be the largest fish of the day, a 26.75 inch redfish 8lbs 6oz. 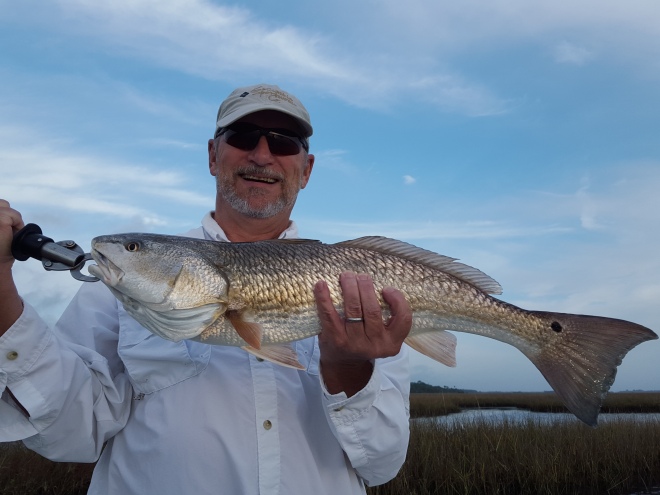 After clearing the lines Gary threw out another cut bait and Jeff tossed another live bait into the same area.  After about 2 minutes Gary landed another nice redfish. 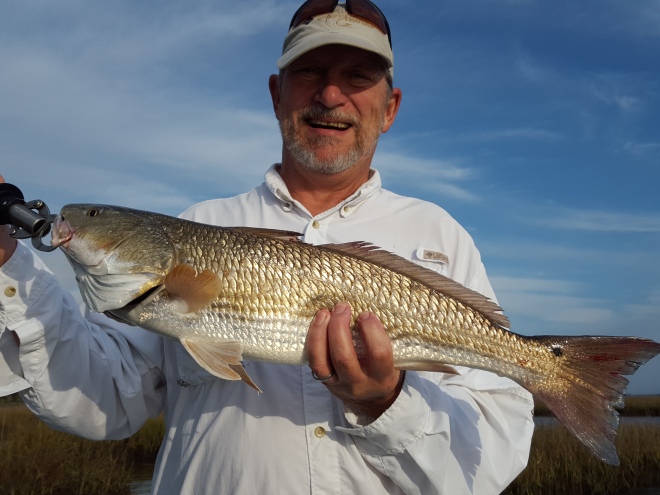 After that it was easy to tell that cut bait was the answer.  The guys switched over to cut bait and both caught redfish.  We rounded out the trip by landing some nice flounder while fishing a creek also.